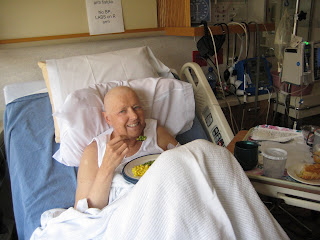 Yesterday we noticed a slight increase in Sabine's white blood cell count (from zero to .7).

So, those stem cells are starting to KICK IN! (For you 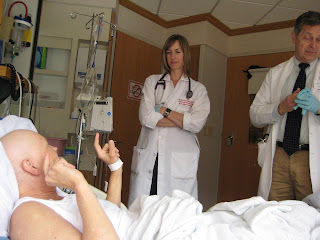 The throat swelling (mucousitis) has gone down permitting Sabine to eat after three days without solid food.

Dr Longo, and Nurse Practitioner Blythe (see picture), has set some goals for Sabine in order for her to be able to be released home. We hoping it's this week! (Maybe Wednesday?) 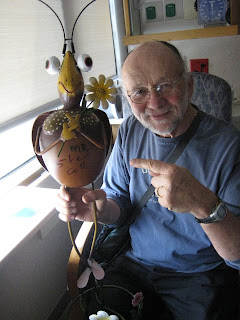 fistula for dialysis. The fistula would then replace the tunnel catheter we now use for dialysis. We are hoping this is not something connect with the transplant.

Continuing prayers are needed to keep those stem cells multiplying in the right way, for no infections to occur, and for Sabine to have a successful transplant.

To celebrate this day (Transplant Day +11) I bought Sabine this metalwork character I found in a gift shop. When I saw it I knew immediately that this was MR. STEM CELL. This little bug looks exactly how I would imagine someone animating a stem cell. He will be with us during Sabine's 110 day recovery at home (or he might end up in the yard looking in the window!

This is a joyful day.

P.S. In case you haven't been following all this closely, I have enclosed this primer on stem cell transplants. A successful stem cell transplant in Sabine's case would most likely give her a year or more without having chemotherapy. With multiple myeloma there is no cure at this time. So we talk about managing the disease.

A bone marrow stem cell transplant uses stem cells derived from bone marrow to provide a fresh and healthy source of new blood cells which in turn, allows for a patient to receive higher doses of chemotherapy to treat certain types of cancer such as leukaemia. This ultimately means that a person has a better chance of surviving cancer. The bone marrow stem cells may be allogeneic and therefore donated by a family member of stranger, or they may be autologous, which utilizes a patient's own stem cells. (Sabine is using her own stem cells – autologous.)

Bone marrow is the soft tissue found in the centre of bones. It is here that new blood cells are formed; stem cells are considered the parent cells of these blood cells. Stem cells in the marrow have the vital task of creating a person's three blood cell types. These are:

* Platelets: aid in clotting after injury


Effects Of Chemotherapy On Bone Marrow

In an autologous transplant, a patient's own stem cells are used. The problem here is that the patient’s bone marrow and peripheral blood usually have a lot of cancer cells, so isolating stem cells can't generally occur until the patient is in remission.

A patient will usually receive some chemotherapy to reduce cancer cells before stem cells are collected. The harvested stem cells are also treated to ensure that no cancer cells remain. Higher doses of chemotherapy are then given, sometimes alongside complete body radiation, to confirm that no cancer remains. Stem cells are then transplanted back into the body via a rapid injection. Stem cells will eventually migrate to the bone marrow, where they latch onto other cells there and develop into the different blood cells.
Posted by My Sabine at 3:00 PM