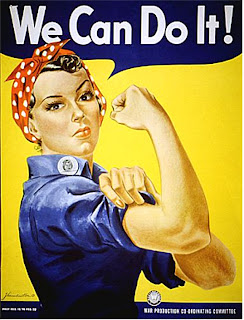 Today is our 3rd hospital infusion. A long day that began at 6:30 a.m. with a drive to UW Hospital, lab work before the chemo is infused and the a four or more hour infusion process. As always, a special team is needed to find a vein to begin the process.

Nevertheless, we try and make "lemonade." I do some internet work for my blog and this coming semester at UW-Platteville. And then there is one of our more popular lunch restaurants a short walk away [I'm the mobile one] called "The Sushi Box."

The reason for Sabine's tiredness and lack of energy this past weeks was revealed in her hemoglobin count 8.2! The good news is that her platelets have increased to sixty-four [they were in the forties last week].

One day at a time.
Posted by Unknown at 3:15 PM No comments:

So here we are again at University Hospital Cancer Center. Sabine still has a low platelet count but we met earlier with Dr Sheehan and he decided to proceed for infusion #2 and discontinue the oral chemo until next week. So far, so good -- get that new immunotherapy drug attacking those wayward blood cells. 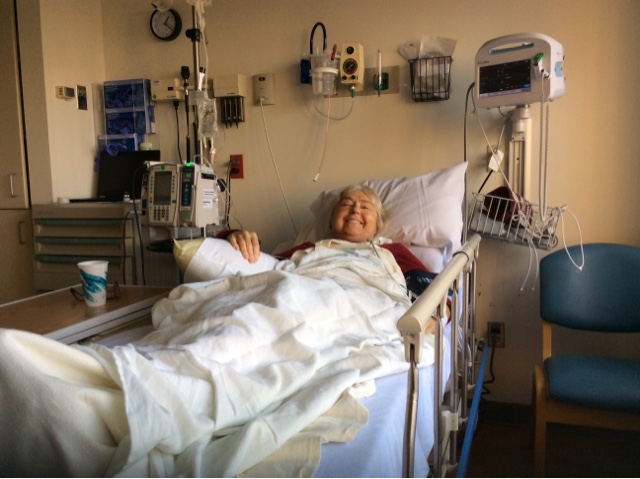 They radiation therapy has given us some anticipated side effects with some swelling in Sabine's throat. Some tiredness. On Wednesday morning Sabine gets some bloodwork done and her second infusion of (elotuzumab)‎.

In the midst of all this, son Joshua and Rachel have their first baby, Alexander Wolf who came in at 9# 11 oz. 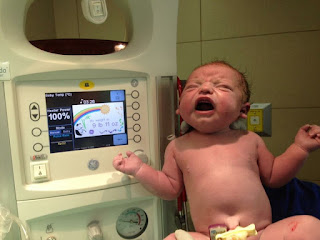 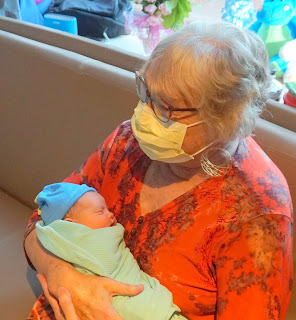 An almost all-day session at the University of Wisconsin Cancer Clinic as we began a four-hour IV infusion of Sabine's new cancer drug. In the midst of all this, and trying to find a vein [the mobile venous A-team had to come with an imaging machine to get the needle in] we were rushed away to radiation oncology to get Sabine's last zapping [number 5 in this cycle]. Whew.
During the afternoon we will be watching for any negartive effects of the drug. If so, she may have to be hospitalized for observation. And somehow tomorrow we will have to fit dialysis in.
In problem at a time... One step at a time... 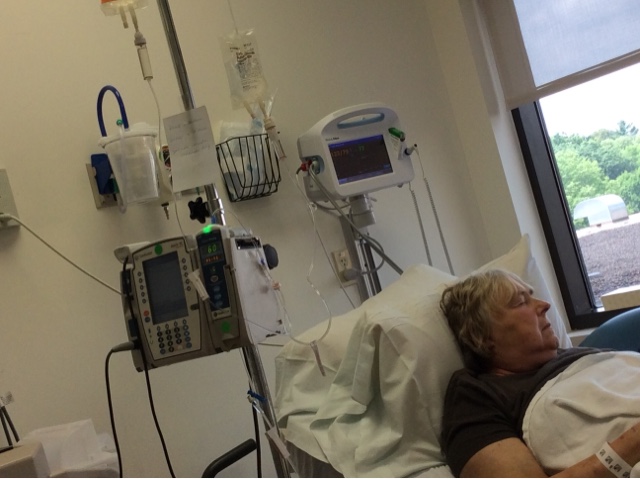 Catching Up: Radiation, Medication, and a New Additional Chemo Drug

Since our return from U.W. Hospital it has been a whirlwind. Sabine started radiation therapy on Friday and Saturday (friend Jeff took her to her Saturday morning appointment while I joined granddaughters Heather, Gracie and Gracie's mother for the 3rd Annual Dubuque Boat Parade) (see pictures below). Sabine's brother, Rainer, showed up on Sunday to help out this week with Sabine's mom.

Radiation was again administered on Monday and today (Tuesday). The 5th session (and last in this cycle) will be tomorrow after an afternoon of the first of four weekly infusions (read: in hospital) of the additional chemo drug, elotuzumab, which is a monoclonal antibody. The first administration of this drug is scheduled for a four hour period of time.

So we have a plan to move forward hoping that the radiation will quickly help reduce the cytomoma to reduce her neck pain. Next, the chemo should kick in and we should see the results in about 4-6 weeks with another MRI.

Thanks to another friend, Tony, Sabine was able to take a ride to Dubuque and pose with the pirate girls before they headed back to Michigan and California on Sunday.

With a great sense of thankfulness and accomplishment I post this.

DAY 6: Out of the Hospital

Whew! What a week. Sabine was released from the hospital last night at about 7 pm. We stopped for a quick bite to eat and headed back to Blue Mounds. Cousin Helene was with Sabine's mom for the past week and granddaughters Heather and Gracie, along with Gracie's mom (also a Heather) arrived to help out. Gracie was really hoping we would be able to make the Dubuque boat parade on Saturday night! And it looks like that might be possible.

We slept in, I went for a swim, Helene made breakfast for us and then we dialyzed.

So here's the drill ahead:

Sabine's brother, Rainer, is coming on Sunday to help us out and relieve Helene.

Sabine is scheduled for her first of five radiation treatments on successive days except for Sunday. The first round of radiation will end on Wednesday.

On Tuesday, we see Dr Sheehan (Sabine's favorite oncologist) to begin a new chemo regimen which will be a continuation of lenalidomide (Revlimid) and dexamethasone with the addition of elotuzumab which will be administered once a week by infusion at the hospital (a somewhat big change).

Four to six weeks from now Sabine will have another MRI to check on the plasma cytoma which is pushing on her spinal cord at C3/C4.

Great to be home and enjoying the Great Creation which surrounds us.
Posted by Unknown at 12:03 PM No comments:

Day 5 in the Hospital

Last night we got the preliminary results of the PET scan: Just ONE hotspot [the one we are concerned about] and NO OTHER myeloma signs [bone erosion or cytomas]. Praise God!

We are to have a consult this morning which will provide a way forward for us that most likely will involve radiation therapy on the plasma cytomas on the cervical vertebrae [C3/C4] and a new chemotherapy. So far, so good.

Stay tuned and for all of you out there who forwarded positive energy and/or prayers: THANKS A MILLION.

Posted by Unknown at 7:58 AM No comments:

Day 4 in the Hospital

Dialysis this morning and then a PET scan this afternoon that will hopefully tell us what is going on and how much of it. We expect to discuss a way forward, a treatment plan, with our oncology team sometime tomorrow.

If the mass turns out not to be an infection but rather a plasma cytomegalovirus then most likely Sabine will undergo radiation on the "hotspot." We expect that, concurrently, there will be a change in her chemotherapy protocol to respond to this new development.

We will know better tomorrow as to what lies ahead.

Let's have some of those good vibrations coming through postive thoughts and/or prayer! 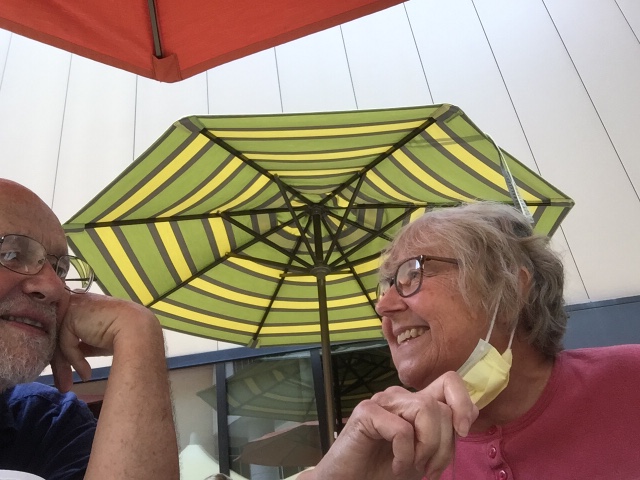 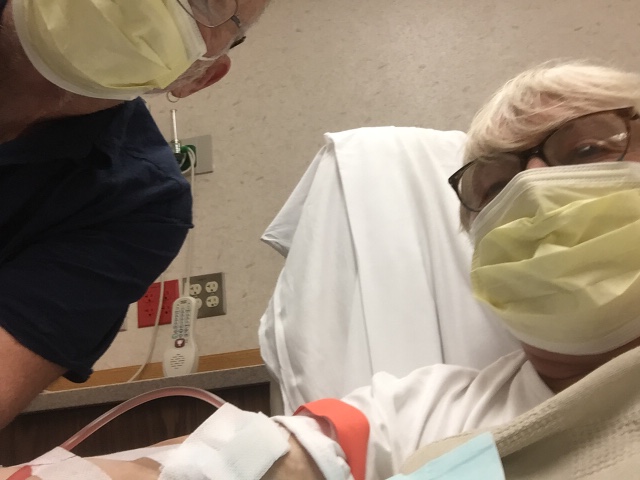 The plan forward,looks like this: I can continue to do daily dialysis with Sabine in the hospital. A great improvement from 8 years ago and greatly reduced Sabine's stress. Looks like a biopsy or surgery is too risky. The problem is whether or not this is an infection or a cancer (plasma cytoma). To help determine which it is a PET scan is being scheduled to help discern if this is cancer or an infection around vertebrae C3 which is pushing on the spinal cord and beloved to be causing the headaches. The problem is that radiation is not so good if it is an infection; but a good course of treatment if it is.
In the meantime, it is hoping and praying time for us.
P.s. Buddy's cousin, Helene, is coming down from Stevens Point this morning to elder-sit.
(Photo below: at UW Hospital dialysis center this morning.) 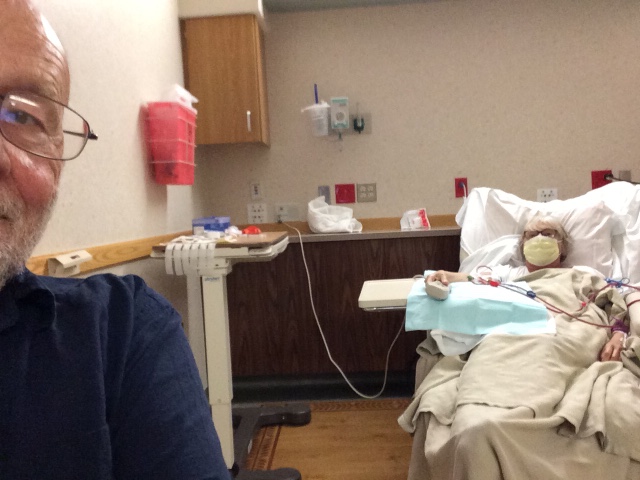 Posted by Unknown at 9:20 AM No comments:

Yes, I've come to walk with you again (Simon and Garfunkel).
All this happened so rapidly. Those of you who know me know that I haven't posted on this blog site for some time now. And tha's because all has been well as SABINE and I enter our 8th year of "managing" this cancer.
So here's my story....
With piercing neck pain I finally got SABINE into the ER yesterday. They did an MRI and found a mass on her cervical vertebrae. It was causing the pain. But it is not known at this time whether it is an infection or a cancer.
The tentative plan is to have neurosurgery go in (if they can do so,safely) in order to have more info. If it is an infection, then antibiotics, if it is a cancer, then radiation therapy.
Helene is coming down from Stevens Point tomorrow to help out with Buddy. I am not only needed here for moral support but also the hospital staff has permitted me to conduct Sabine's dialysis each day.
This is a big setback for us. All was going too well. But eight years is not a bad run. I hope and pray we can eek out more time.
I am not ready for this as I sense this growing fear and sadness within.
Love to you all. Prayers are most welcome. 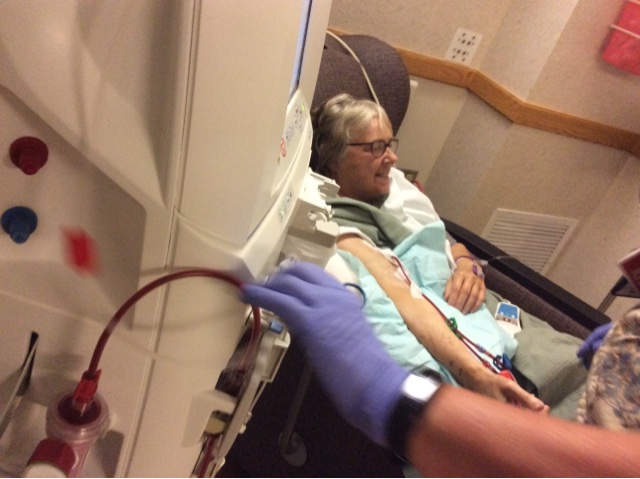