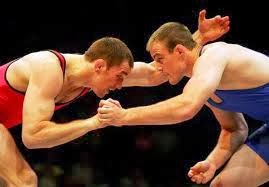 In January, we begin the 7th year of our cancer fight. I know some folks don't like to call it a fight, but for me that's exactly what it is... more like a wrestling match for an old grappler like me. Into a contest, my strategy was to control my opponent, get some points built up and work for the pin which would end the match.

That's how I feel today... I am trying to control this opponent (those nasty light chains in Sabine's blood) and I think we are doing a pretty good job (yes, "we" is Drs. Sheehan and Chan and their medical teams).

If you read the first blogs I posted it all sounded pretty grim -- like maybe there wouldn't be time to control the match.

So this Christmastide I am greatly thankful for these years I never thought I would have with Sabine. That's what blessing is -- something never expected yet something that needs to simply be accepted with a God-directed, thank you!

We have gone through a number of cancer treatment cycles this year with Velcade (bortezomid) being the primary drug in combination with the steroid drug, dexamethasone, and, occasionally, Revilmid (lenalidomide).

Eventually, the efficacy of Velcade will diminish (we may be starting that possibility now), but there is a new type of drug in the same class coming down the pike that may be of help. However, using this new drug will result in going back to intervenous infusions twice a week, two days in a row.

The last few cycles of Velcade have been much easier on Sabine because the drug could be used subcutaneously (just under the skin).

In the meantime, we have both lived our life together in its fullest -- daily exercise, trips, family reunions, church activities, and time with friends.

Yep, that's what it's all about.

Ding, Ding. Round two coming up!
Posted by My Sabine at 4:30 PM No comments: