Stop the World: I Want to Get Off! 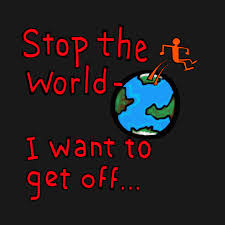 "Stop the World, I Want to Get Off" was a popular 1966 musical. The plot was about a selfish and dissatisfied man, Littlechap, who kept on seeking and searching in life only to realize that all his happiness resided at home and the love of his wife. A modern morality story. Nevertheless, I thought of this saying and how much it applies to today's lives. If Littlechap wanted his 1960s world to stop so he could get off, what would he have thought about the pace of life today?

So, I have decided not to stop the world in which I live, but to try and slow it down. I have now gone about a week from signing off my Facebook, Twitter and LinkedIn accounts and to disengage from being the police reformer (isn't 50+ years enough?).

This week I have had the distinct feeling of a great weight being taken off my shoulders -- I feel that I even walk more lightly.

I have been thinking about how quickly the last 10 years of my life have gone by. It was 10 years ago that Sabine was diagnosed with Multiple Myeloma, an incurable blood cancer; this nasty cancer also wiped out her kidneys, do we elected to do home hemodialysis five days a week and have continued to do so since then. It turned out to be a blessing as it has given us flexibility and, I believe, extended her "expiration date."

So here I am at 80 years of age and thinking that if the next decade goes as fast as the last one I had better take stock of what I am doing NOW! Is the struggle to reform police how I want to spend my remaining days?

To be able to focus on things more spiritual is for me to wean away from the daily news cycle. Do I really need to know all this information right now? Will it help me become a better person?

Since January, I stopped watching Morning Joe on MSNBC because it caused me to get riled up for the remainder of the day. The same for network and internet news. I am now attempting to go "cold turkey” from the daily news. I have to admit that watching the unacceptable public behavior of our President is one of the primary reasons.

In the interim, I will pray for him and vote my conscience at every opportunity. I deeply fear he is not helping any of us to become a better people.

For seven years I wrote the blog, “Improving Police.” On it I have written over 1,200 posts on various aspects of policing and what I believe police must do. During this time, it has been viewed over 500,000 times and has 3,000 followers.

I find myself in the position today of believing I have said all that I needed to say about policing in America. What more could I say? It’s been a long haul from my first days as a police officer almost 60 years ago! I have to accept that the reformation I hoped to see among our nation's police will most likely occur well after my departure.

With the time I have left in this world I choose no longer to be the police reformer. I have argued my case. It’s now time to begin another phase in my life. In it, social justice will continue to play a vital role.

I now intend to focus on a less-developed part of my life – poetry and add to what I have written in the past (The Sabine Poems: Story of a Courtship, Segments, and Restoration Point).

I will continue my duties as pastor to St. Peter’s Church in North Lake as long as I am physically able, they agree, and I have my bishop’s permission. Our relationships there over the past 12 years have also contributed to Sabine's spiritual and physical health. Of that I am sure.

The remaining portion of my life will continue to be served as a caregiver for my absolute best friend; a woman who has blessed and helped me to grow in so many ways.