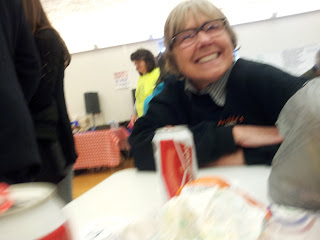 As many of you know, Sabine has been off chemotherapy for the past six weeks. Sabine recently remembered the "five year" statement by Dr Sheehan early in our cancer fight. January 16, 2013 was the five-year anniversary and her "expiration date," which, thanks be to God, has now been exceeded!

Yesterday, we saw Dr Sheehan and reviewed her "numbers." They had risen somewhat during the past six weeks, but not, we were told, "significantly." Thus -- SIX MORE WEEKS OFF!

For my sake, Sabine pressed Dr Sheehan for another "expiration date" (more for my sake than hers!) and with the advent of a couple of new drugs like Velcade (bortezomib) that has worked well against Sabine's blood cancer. "At least two more years," he said.

And we are so thankful for our family, friends, and church friends who have so diligently kept Sabine in both thought and prayer!
Posted by My Sabine at 10:38 AM 2 comments: