I think a big part of the caregiving and cancer-fighting business is to take a break whenever you can.  We have always loved weekend getaways (fondly remembering them in the b.k. days [before kids!]).

This past weekend we attended Sabine's 35th college reunion at Gustavus Adolphus College in St Peter, MN.  (Actually it is part of my history, too.  My first semester at college before I got antsy and joined the Marines was at Gustavus.) 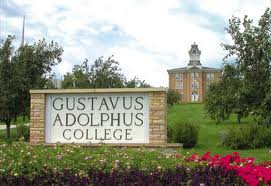 We stayed at the Locust Street B&B, attended the Gustavus-St Olaf homecoming football game, met the Homecoming Queen (who was staying at the B&B, took a class picture on the steps of "Old Main," and attended a performance that evening by comedian Scott Novotny (who wrote for Saturday Night Live in the 70s and was a fellow theater major with Sabine) and then woke up on Sunday morning, attended Church of the Holy Communion (Episcopal) and then tried to get home after finding numerous road closings due to the flooding in southeast Minnesota.  But we finally made it home just in time to attend the American Players Theater's stunning performance in Spring Green of South African playwright Athol Fugard's "Exits and Entrances."  Whew!  A great weekend.  Today (Monday) Sabine gets blood drawn for her appointment with Dr Sheehan next week.  We will then see where the cancer is going (hopefully and prayerfully it hit a dead end!).  Dialysis went well today (bulls eyes on both "sticks!").  Life is good!

Sabine's fistula-gram on Monday had some good results.  According to the docs, the fistula looks good and there are no blockages visible -- and the stint that was put in a while back is firmly in place.  So what happened last week?

So the week has gone well until this morning when we were encountering some high arterial pressures.  The procedure is to adjust the needle, raising it, doing some half-twists... still high pressure.  When I was adjusting the needle it inadvertently came out!  Now that's excitement, spurting blood, a loose sharp needle and the dialysis machine screaming alarms.  We got the bleeding stopped but could not get the machine running again because it picked up too much air in the system.  So it's "shut down" time.  Bagging the cartridge in a bio-waste bag and consulting with our nursing staff in Madison.

Sabine has an acupuncture appointment early this afternoon so we will put off another dialysis try until she returns.  And as for the cancer, still watching and waiting.  An exciting day for the retired -- too exciting!
Posted by My Sabine at 10:53 AM No comments:

It's been a tough two days!  One of those "just went you thought it was safe to go back in the water" days 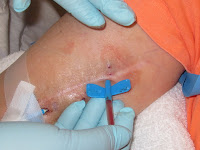 .
After months of relatively easy dialysis connections and treatment, it all fell apart.  Suddenly, I was not able to make the "cannulations" and we had to abandon the "blunt" needles and go to the "sharps."

This meant that I had to start two new puncture sights above the old ones.  Not an easy task via telephone.  But we did it and things went fairly well.
Then we encountered high arterial and venous pressures and had to abort the treatment.  The second time it happened we ended up going to Madison and getting some help from the staff at our dialysis center.
Even there they had trouble getting a venous connection (it made me feel a little bit better that it wasn't me as I saw the professionals struggle!).  Finally we were able to make the insertion and begin the treatment with the home dialysis machine in the center. But even there our troubles were not over and we had to terminate early when a perforation occurred.
So what's going on?  Problems with the fisula again?  Most likely.  We are being scheduled for a fistula gram at the UW Hospital to check for a blockage or other problems in the area.  And this morning, at home, I was able to use the new arterial site with a sharp needel and then use a sharp in the old buttonhole when the blunt needle didn't work.  Then the connections were make and we had a good "run." 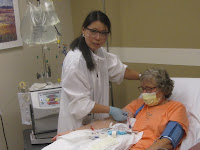 These are the times that being a "marriage team" works!  We solve problems and take necessary action without bickering or yelling at one another.  At the same time, while I feel the stress of all this, it's not my arm that is getting the multiple needle sticks!  Sabine (again) has been a real trouper (but that's one of the reasons I love her so much, she's always been a great trouper!).
What's ahead?  We will have some hurdles to jump over in the next weeks and some problems to solve -- another in-patient hospital visist to look at the fistula, possible some intervention to clear the blockage, consultations, and then we will begin to work on creating two new alternate needle/cannulation sites and, hopefully, can reclaim those two blocked "buttonholes."
In the meantime, we are "watching and waiting" with regard to the cancer.  We would ask you to continue to pray for Sabine's healing and calm resolve as we wait for the six-week blood test that will determine how those nasty cancer cells are doing -- I pray they are having a tough time and will soon give up!
Thus ends our battlefield report!
Posted by My Sabine at 3:15 PM 1 comment: 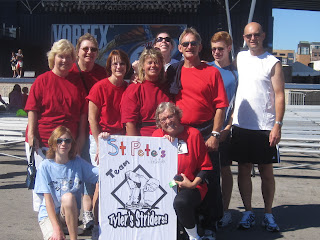 Not letting a little cancer flare up crimp her style, Sabine takes first place in her age category at the 2-mile "Dylan's Run" on Lakeside Park in Milwaukee!  Go, girl!! (I had to work while Sabine and other members of St Peter's support autism research!) 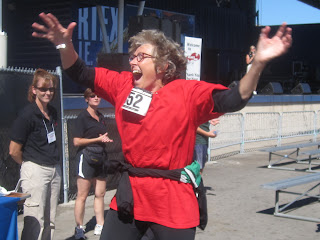 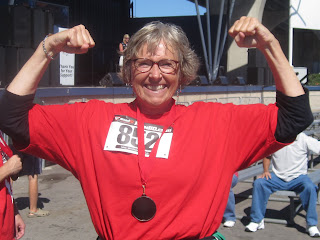 It is sometimes difficult to understand the emotional roller-coaster cancer victims and their loved ones experience.  Sabine was visibly upset when she heard that our friend, Dennis, from our cancer support group had taken ill last week.  We had known Dennis for over two years now.  Yesteday, we heard he had died.  This morning, his obituary was in the Madison newspaper.

Dennis was one of the more healthier persons in our group.   To see him suddenly and rapidly go downhill was unsettling to both of us.  Sabine and I were at supper in Middleton when I told her about the email I received concerning Dennis' death.  For both of us it was another wake-up call.  Things change in this cancer game and they can change quickly.  Only a few weeks earlier, we were planning on attending a summer evening concert with Dennis and his wife in nearby Mt Horeb.

I am writing this because I know that the journey most cancer patients and their loved ones are on will not have a happy ending.  I want this life we have together to go on.  I want to hear Sabine say again and again like she did this weekend: "This has been my best summer ever!"

I tossed and turned in bed last night thinking of Dennis' wife and children.  How fleeting this life is.  How important it is to fully live and celebrate each day -- one day that day may be the last day we will have together.  This is the thought that remains hidden in my psyche; that the most terrible event in my life awaits me.  God give me strength.

Our hearts and prayers go out to Jane and her family.  May Dennis' soul rest in peace.
Posted by My Sabine at 1:49 PM No comments: