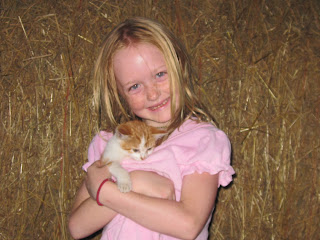 is raising money through the Leukemia - Lymphona Society to fight blood cancer's like Sabine's.  Here is a letter from her mother, Heather:

"Gracie and I are raising money for a very important cause, through The Leukemia & Lymphoma Society's 'Light The Night Walk:' finding better treatments and cures for blood cancers so patients can live better, longer lives.


"We have joined team 'Havianna's Hero' again and are excited to be walking with Havianna this year on November 5th. She will be one of the survivors caring a white ballon.

"I'm asking you to help by making a tax-deductible contribution! Please use the link in this email to donate online quickly & securely. You will receive an email confirmation of your donation as soon as it is made. I thank you in advance for your support which will make a difference in the lives of thousands of patients battling blood cancers.

"I really appreciate your generosity!!
http://pages.lightthenight.org/sd/SanDiego10/GCouper

"Thank you, Gracie and Heather."
Posted by My Sabine at 10:46 AM No comments:

Oh, oh... forgot to tell you that Charlotte was hit by a car while crossing an intersection in Mt Horeb and is okay.   Sorry!

Charlotte was conveyed to Meriter Hospital, checked out, and then released the same day with a full leg cast.  Yesterday, she went to in to see her physician and was informed she had a broken tibia.  No weight on her leg for six weeks! (in the midst of all this we have about thirty family members on sight for my son Matt's memorial service!).

Could have been worse... an 86 year old woman is hit by an automobile and only breaks a leg!  If am afraid that two deaths in one week would have been even too much for Sabine!
Posted by My Sabine at 8:57 AM No comments:

Not only Sabine fighting a most viscious cancer, she is also able to come alongside and minister to her grieving husband -- me!  Last week my son, Matthew, died unexpectedly and tragically.  You can read all about it at my "spirituality blog" at http://christinyouchristinme.blogspot.com.

But what you don't get by reading the blog is that this has been a tremendous loss and struggle for Sabine.  Although she is the (and I hate the word) Matt's "step-mother," she has been a big part of  his life.

The good news just before I left for California to make "arrangements," we received a 6-week report on her "cancer numbers."  While they have increased, the rate seems to be pretty slow.  And Dr Sheehan so far doesn't want to see us for another 6 weeks.  Good news!  But Matt's death has been difficutl for all of us.

And while I was away for the past 6 days, Sabine's dialysis at the clinic was very difficult for her.  This morning (thanks be to God!) I made all the connections (sticks) with one attempt and the treatment went well.... almost... as we were in treatment we got a call from a friend in Mt. Horeb that Sabine's mother, Charlotte, had been in an auto accident and was being conveyed to Meriter Hospital in Madison!  One of my best friends is a resident chaplain at Meriter and he was able to meet Sabine's mom in the emergency room.  (Interestingly, he is also going to officiate at our son's memorial service this Saturday).

As my friend relayed us the information on Charlotte, he concluded by saying, "You know being in relationship with you, David, is quite stressful!"  If Sabine was there I would imagine she would agree!
Posted by My Sabine at 2:29 PM No comments: