At UW Hospital today for a "root-router" of her veins to eliminate arm and face swelling. We have to do this no less than every three months. Due to Sabine's low platelet count she had to have a platelet transfusion prior to her surgery today. Dr Chan checked in and told me the procedure went well and "see you all in three months." All this still is worrisome because the swelling makes it difficult to put in the fistula needles. We'll see tomorrow how it goes and how the swelling has gone down. 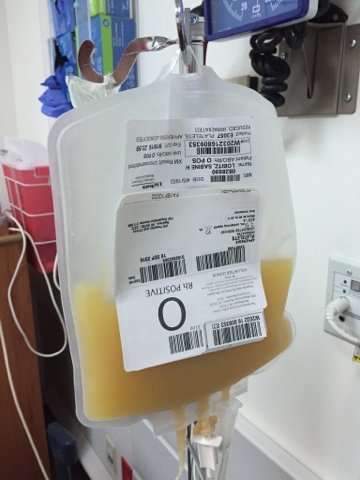 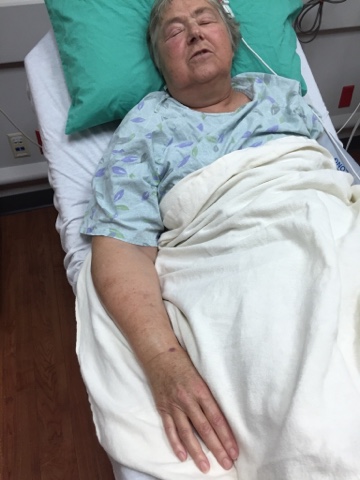 Posted by Unknown at 3:03 PM No comments:

I sometimes imagine I have a stress gauge. Some people can tell when their blood pressure rises, for me, it's stress. After the last two weeks, I see the needle on my stress gauge slowing edging into the "red zone." I can't imagine what these past two weeks have been for Sabine!

It all started with her having a "pulled muscle" in her neck. Or so she thought. After two ER admissions and an MRI, a small mass was observed on her neck (cervical vertebrae) on her dura -- the sheath around her spinal cord. No, not good.

She was admitted to the hospital for a five days stint trying to figure out if it was an infection or plasmacytoma. The latter would be caused by her multiple myeloma.

Many doctor visits in the room. We did daily dialysis in hospital with me doing the procedure (that dropped Sabine's stress needle a lot -- at first, it was why she did not want to go to the hospital despite her growing neck pain!). She worried about how the dialysis would be done and would the hospital let me supervise. They did. That was good.

Then a PET scan calmed things down a bit because it showed only ONE cytoma on her neck and not an outburst (hot spots) in other parts of her body.

Then 5 successive radiation treatments on the C3/C4 area of her neck vertebrae.

Then a change in her chemotherapy protocol due to increasing cancer numbers and a dropping level of platelets.

Then a bone marrow biopsy (2 sticks) in order to get some bone marrow out of her pelvic region (yes, ouch, again). (A later report showed about 40% myeloma cells [we forget what the number was when we started] and no displace --  that is no other hematological problems in her blood. Very good news.)

The first day of the new treatment regimen also required us to go out to the new UW Hospital on Madison's eastside to get echo-grams of Sabine's heart and shoulder (the IV chemo has a history of causing some heart problems. I think the doc wanted to have a baseline for her as we begin this new treatment).

We have now switched from solely an oral treatment to pills plus hospital infusion. This means a monthly cycle of Thursday/Friday infusions with oral pills between. The new drugs are IV carfilzomib with oral dexamethasone and pomalidomide. (While the other drugs are well-covered with manageable co-pays, Medicare covers 95% of the pomalidomide. That's 95% of $14,000 per week. We pay the remaining 5%.)

On top of all this, I was signed up to teach fall semester at Platteville! And next week is our annual policing conference on campus. Yes, red zone, red zone!

Writing about this after a fairly quiet weekend in which we went out to dinner. Thursday night Sabine wanted to attend the APT play, "Arcadia," in Spring Green. We made it through the first act. And on Saturday we attended a faculty picnic and football game in Platteville things don't seem quite as bad.

Along with some exercise every day, Sabine wishes to be active. That's how she manages.

Also, as people of faith, our church family has been a great source of prayer and support. They have been with us now from the beginning! For that we are deeply thankful.

I guess it's a combination of deep-breathing, thinking "carpe diem," and re-framing a new protocol. A fellow faculty member took my Thursday class so I could see how the new chemo infusion went. It thankfully went well!

That's my report from the trench. It's a little deeper, but looking better.

We decided, yes, we can do this!

Dr Sheehan called and told us Sabine's "numbers" were up and that he wanted to see a bone marrow biopsy. So, on Wednesday we go for that and a meeting with his Nurse Practitioner (Dr Sheehan will be on vacation for a week).

Additionally, we will have to stop the elotuzumib
and go for different chemo that will involve two IV infusion days each week (on Thursdays and Fridays).

So, a big week ahead. I start teaching and we are at the hospital for three days this week.