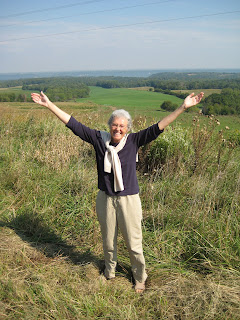 We met with Dr Sheehan yesterday and reviewed Sabine's "numbers." Those nasty little proteins called "lambda light chains" (which originally caused her kidneys to fail back in December) continue to be repressed.

What this means is that Sabine has another 8 week reprieve from chemotherapy. Hallelujah!

Thanks to all of you who have either prayed for her or sent good healing thoughts to her in other ways.

We look forward to a better Christmas and New Year than we had last year.

And we are very, very thankful people! 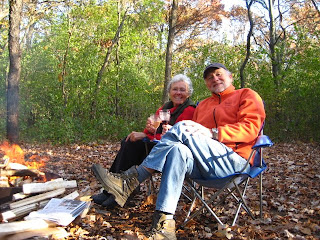 Last week ended with a bit of a sour note: we went into surgery on Friday expecting to widen the vein-artery hookup for Sabine's fistula. Instead, we got the bad news that the connection was not working and that (again) Sabine's veins were too small.

So, this coming Friday we will meet with the access surgeon, Dr Yolanda Becker, and see what she recommends. We do have some good x-rays and Dr. Yevzlin, the surgeon on Friday, said he saw some promising veins near the elbow of the arm.

Right now, with all of Sabine's surgery scars on her arm she looks like she has been in a knife fight and lost!

We recovered the disappointment of the day by continuing our plans to do a trial run with our new camper and to do dialysis at one of our state parks on the way to see our grandkids in St. Paul.


We stopped at Willow River State Park near Hudson and found it to be a magnificently beautiful park with high bluff hiking trails, a cascading waterfall and plenty of deer seeking

refuge from the hunters that surrounded the park. We woke up on Saturday morning to find three of them meandering around our campsite.


We had packed up and rechecked all of our dialysis supplies, and although the surroundings were somewhat confined, the treatment procedure went well with no problems and no alarms on the machine! The camper has a heater, hot water, refrigerator and all the comforts of home. It got below freezing that night, but we were quite comfortable in our queen sized bed with down comforters. 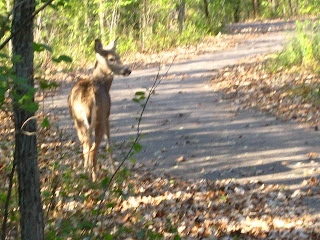 After a long hike on Saturday morning we settled down for the day over a campfire.

Saturday was our dialysis "day-off" and we woke up early Sunday morning, did the procedure and then headed up to St Paul to see Peter, Tammy, and our three grandkids: Samantha, Ben and Hannah.

We spend the night in the camper in Pete and Tammy's driveway, had breakfast with the gang, kissed them "goodbye" and headed back to Wisconsin.

What started out as a potential "bummer" for the weekend turned out to be the best of all times! God is good! 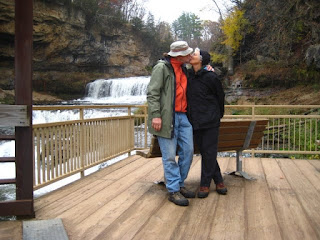 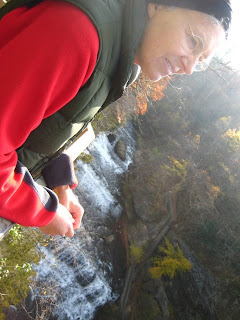 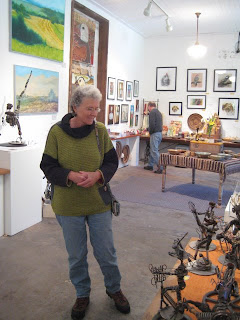 Some weekends are best when nothing is precisely planned... A weekend of just "hanging out!"

So Sabine, Mocha and I headed a little south to the Mineral Point Art Fair, checked out some pottery, had "pasty" to go and sat on one of the benches downtown and enjoyed the warm sun and the people. 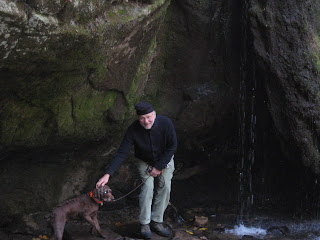 Afterwards, we drove up to Governor Dodge State Park and checked out Stephens Falls. (I was there two weeks ago for Grandson Ben's "Manhood Initiation Rite" to celebrate his 13th birthday (you can see more of that at: http://www.youtube.com/watch?v=yhTX86vHTh0). This is a beautiful place that was etched into a canyon and waterfall (probably after the ice age). 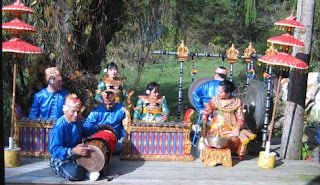 Our next stop was Global Village just south of Spring Green and west of Taliesin on County Highway C. We heard about this event and thought it would be interesting.

Marion, from Global Village, has been visiting Indonesia for over 30 years. She persuaded an Indonesian band and dancers to come up to Wisconsin from Chicago. It was beautiful! We had dances from Bali and Java and authentic Indonesian music with three gamelans (a 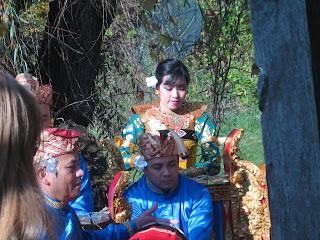 I, unfortunately, expired my camera battery before I had a chance to take a picture of the dancers (but I found one on the internet that was very similar to what we saw!). 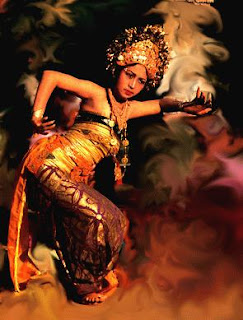 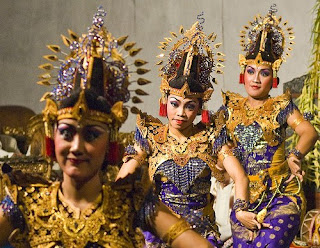 As we drove home, we were overwhelmed by the cultural opportunities in this area of rural Wisconsin -- and it's not even Madison!

On Sunday, I "supplied" at St Mary's Episcopal Church in Dousman -- a lively congregation!

Keep us in your thoughts and prayers as we consult with Sabine's oncologist/hematologist on October 29th! 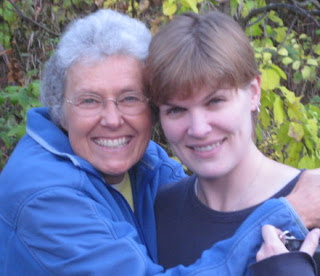 This past week has been wonderful both weather and activity-wise. Sabine's niece, Meg Lobitz, came for a visit. Meg lives in the Chicago area and is a veterinarian. It was great to see her and connect with the Lobitz side of the family (Meg is Sabine's brother, Rainer's daughter).

Home dialysis continues to go well and we are looking forward to doing some traveling this winter.


Next week we take our lab tests in preparation for our meeting with Dr Sheehan the following week. We still need positive thoughts/prayers for the continued repression of Sabine's cancer. 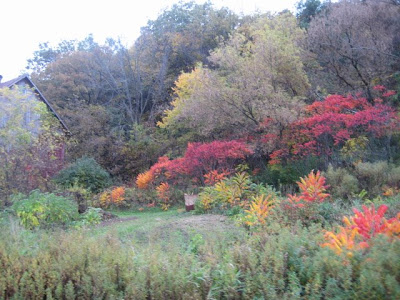 It was also the kind of week which inspired us as we watched the magnificent fall colors come to our Blue Mounds. 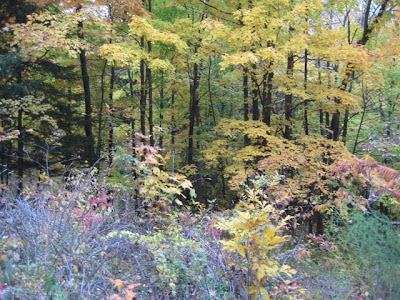 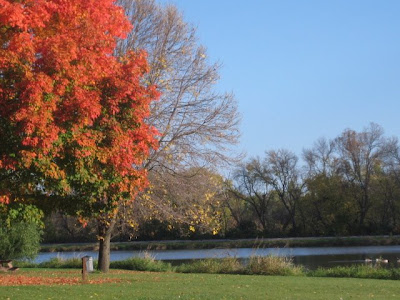 of hues and shadows

as we stand on the cliff

from whom all blessings flow 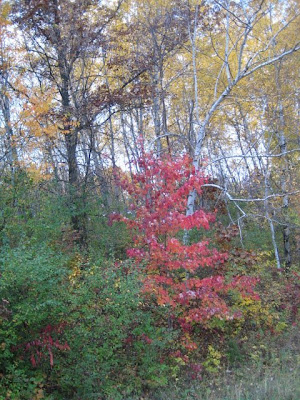 Thanks and blessings to all of you from the two of us still on the front lines.... still "battle buddies!" 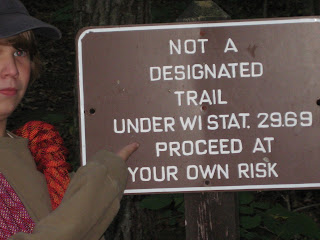 Whoa..... the sign on the trail. (But I had reconnoitered the cliffs the week before and decided this was THE place!) Does Ben look concerned? 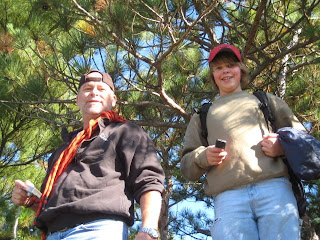 Ben with his Dad. Kings of the mountain! 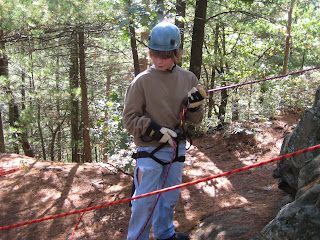 Just before Ben rappels the 80 foot cliff. (He made two descents that day!) 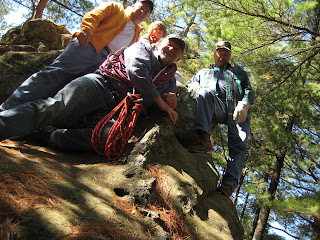 Taking a break on the first day. 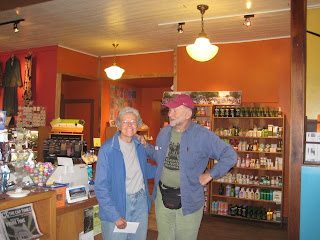 For the first time, this weekend Sabine and I went on separate adventures.

And so today we had lunch together at the wonderful "General Store" in nearby Spring Green.

Sabine was a panelist for an area conference in Waukesha on multiple myeloma sponsored the International Myeloma Foundation.

(She was on a patient panel and I heard that she had an opening joke: "What is the difference between a pit bull and a person fighting multiple myeloma? Answer: There is no difference!)

I also heard that one of her remarks had to do with the term, "caregiver," which she doesn't particularly like; instead, Sabine and I use the term, "battle buddy!" because on the battlefield, even if you are wounded, you still fight back and watch the back of your buddy.

Instead of attending the conference with Sabine, it was the weekend that my son, Peter, and I (along with Peter's father-in-law) were going to have a weekend "rite of passage" for Peter's son, and our grandson, Benjamin, for his 13th birthday.

So, my part of the weekend is that we assembled at nearby Governor Dodge State Park and spent three days working on our rock climbing skills and rappelling some great cliffs in that park. This, of course, was not the place for either mothers or grandmothers!

We don't have a "rite of passage" anymore in this society and heeding the remarks of the late Joseph Campbell that any society that permits boys to teach other boys how to be a man is in deep trouble, we set out for the cliffs!

I have enclosed a few of the pictures in a separate post from that weekend.

But first, this email that Sabine received after her presentation in Waukesha: from one of the myeloma conference organizers:

I want to offer each of you my personal thanks for the awesome job you all did at the MM conference by sharing your personal journeys through Myeloma land. I heard MANY wonderful comments about your speeches, and I know you absolutely touched many, and gave them hope and inspiration.

For some of you, speaking may come easily, while for others it may have been a bit out of your comfort zone, and you all did an amazing job. My only regret is that each of you only had 5 minutes to share, I know you all had lots more to say and I would have loved to have each of you share for lots longer, but you did great in the time you did have. I know you have all had many ups and downs, but the things you shared put a positive spin out there for others struggling with the same issues and challenges you have each faced.

Several people commented to me throughout the afternoon that it was the best Patient Panel ever – and for that the credit goes to all of YOU!! It would not have been the success that it was without your participation. Thank you, thank you, THANK YOU!! I wish each of you good health and success in your battle against myeloma!!