Not As Easy As You Think!

As I mentioned earlier, I am making the "insertions" of the two 15 ga. needles into Sabine's arm three times a week at the dialysis center in Madison.  I have a great coach in Xin Lu, who patiently directs my big paws! 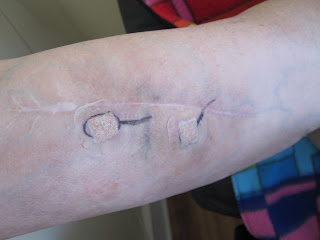 You can see in the picture that I have drawn circles with my magic marker to bullseye the needle entry points and the direction of insertion.

While the first three days went well, I sort of crashed yesterday missing the fistula both times -- but finally got a "flash" indicating I was in the fistula and the rest of the treatment went well.

We will be going to the Center again next week while I maintain the same angle of insertion (about 30 degrees) and the same entry "tunnel" to the fistula in Sabine's arm so that we can eventually establish the "buttonhole."

When the buttonhole is established, we will do the insertions (cannulations) at home with a blunt needle which will access the same tunnel I have developed over the past few weeks.

As soon as we develop the buttonhole and all systems are "go," then the tunnel catheter can be removed from Sabine's neck enabling her to get back into the water this summer!

p.p.s. After reviewing the entire video I  have to let you know that my training at the Wisconsin Dialysis Center involved  more infection precautions: masking up and wearing gloves for both "putting on" and "taking off,", and using chlorohexidine at the buttonhole sites rather than betadyne.
Posted by My Sabine at 12:49 PM