Report from the frontlines... 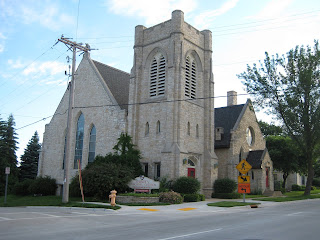 This week has been another restful one and a good week. We got our washed-out driveway re-graveled and some re-ditching of the run-off water so that it went into the culvert and NOT down our driveway making a new whitewater kayak run to Highway K!
Sabine has been out running and I gave her this Sunday off as I drove to Trinity Episcopal Church in Janesville and celebrated at two services -- 8 am and 9:30. That meant an early rise and departure. Sabine got to sleep in and went to church with her mother in Barneveld. 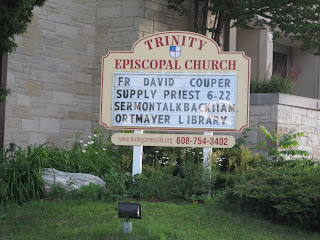 When I arrived at Trinity I was surprised to see that I had some "billing" there -- a sermon and a "talk-back" was the announcement. It had been a while since I had led worship at a large congregation (but thankfully my internship during seminary at Grace Episcopal in Madison prepared me for this!). 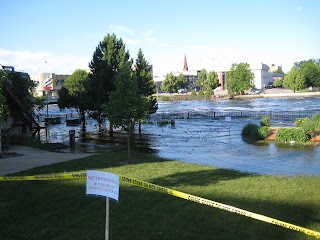 As many of you know, the Midwest has been plagued by huge downpours. It seems most of Iowa is underwater and locally is no exception. You can see by this picture that the Rock River is on a rampage and yet to crest. It flows through downtown Janesville with an unimagineable power. In the foreground, life goes on as thousands of carp (you can see their fins in the water) still continue to do what comes naturally to them -- spawn!).
As you can imagine, we are very excited and thankful about getting on OK from our health care provider regarding the home dialysis. On July 7, we begin three weeks of training for home dialysis, four hours each day, Monday through Friday!
Next week is our first of two "Relays for Life" to help raise money for cancer research. If you are able we would sure like to see you on this coming Friday night at 6 p.m. Look for "Dorothy" and some of the Wizard of Oz characters on the track at the Wisconsin Heights High School (located on Highway 14 between Black Earth and Mazomanie).
On another positive note, our dear friend, Herman Goldstein, found this article in the New York Times and forwarded it to us. Here's part of that article.
Cancer as a Disease, Not a Death Sentence
By JANE E. BRODY
Published: June 17, 2008
"To see Barry Cooper working out at the Y.M.C.A. in Brooklyn every morning before going to work as a patent lawyer, you would be unlikely to guess that he has cancer. Mr. Cooper, 63 and a grandfather of two, is one of a small but growing number of patients for whom once-fatal cancer has become a chronic disease.
"Through a better understanding of factors that distinguish cancer cells from normal ones and the development of more specific treatments that capitalize on those differences, cancers that just a decade ago would have been rapidly fatal are now being controlled for years while the patients conduct near-normal lives.
"Although these cancers may never be curable, they can often be controlled for long periods by a succession of treatments. When one therapeutic approach no longer works, another one that has come along in the meantime might stop the disease from progressing, at least for a while.
Even patients whose cancers were already metastatic — spread beyond the site of origin — at the time of diagnosis are benefiting from this sequential approach. Others like Mr. Cooper have cancers of blood-forming organs that previously had a limited response to available therapies.
“'We’re seeing people being periodically treated and living year after year with advanced disease, with cancers that have spread to the lung, liver, brain or bone,' Dr. Michael Fisch, director of the general oncology program at the M. D. Anderson Cancer Center in Houston, said in an interview. 'In 1997, we wouldn’t have guessed this would be possible.'
"In March 2007, Elizabeth Edwards, wife of former presidential hopeful John Edwards, joined this group of chronic cancer patients when she disclosed that the breast cancer she was treated for in 2004 had spread to her bones and, possibly, lung. Mr. Edwards described the disease as 'no longer curable but completely treatable' and likened the situation to living with diabetes.
"Speaking generally, Dr. Francisco J. Esteva, a breast cancer specialist at the Anderson center, said in an interview: 'Our ultimate goal is not to make this a chronic disease, but to keep patients alive long enough until we can find the right treatment for the right patient and cure the disease. Unfortunately, we’re not there yet, but meanwhile we try to keep patients alive with a good quality of life for as long as possible.'
This sure sounded good!! Love and blessing to all of you!
Posted by My Sabine at 7:40 AM