I always feel a bit anxious before Sabine's visit to her oncologist.  I think I have described it as hearing the tick-tock of a clock (is it a time bomb?)  Last week, Sabine took the customary blood tests in preparation for her meeting with her oncologist, Dr Sheehan, this coming Wednesday.  All but one of the blood tests had come back and in my layman's opinion, all looked good and within "normal" ranges.  But one was missing.

It was the primary cancer test -- the test that would tell us if Sabine's cancer was still in check (since the stem cell transplant a year ago), or not.  It is called the serum light chain test.  Usually, we get the test back from the lab in California about the same time we get the other locally-tested blood work.

So we checked and checked last week and nothing appeared on Sabine's test results chart.  We checked with the local lab who said that it should be coming back any time now.  I have to admit that I wasn't too worried about the results because I would have bet the "numbers" would be okay.  After all, Sabine had plenty of energy these past six weeks and we (except for dialysis five times a week) were living a pretty normal life, running, biking, and kayaking with a lot of other activity including a weeklong visit from numerous family members!

But last night we stopped by to visit some friends of ours who are also members of our cancer support group.  We missed last week's meeting because of the family gathering and now they were giving us an update -- and it wasn't good.  A man we had gotten to know quite well from our group suddenly was in palliative care -- his cancer had come back with a vengeance.  He had plunged downward rather rapidly after his second stem cell transplant.  I could see that Sabine was very upset when she heard about what had happened to him.  Last year alone, we lost two members of our support group to the cancer each one of us battles.  Each death is shaking reminder of this untreatable cancer!

This morning, on the way to lead worship in North Lake, I casually checked my email messages.  There was a notification from Sabine's physician that she checked on the lab test and was sure it would arrive by the time we saw Dr Sheehan.  But there also was another message -- "new test results."  I pulled the car over and went to the website of Sabine's healthcare provider and pulled up the new test results.  It wasn't what I had expected -- the numbers had doubled and were now out of the normal range!

It was a "kick in the stomach" for both of us.  But what does it mean? The cancer was now growing again, but how much?  Is this significnant?  What's  next for us?  Well, right now we don't know and we must wait in this interim period until we consult with Dr Sheehan.  But we had watched these numbers double before when Sabine went through her last chemotherapy.

I could see that Sabine needed to process this downturn.  She asked for some time alone and urged me to continue to North Lake and lead the worship service.  I was shaken, but felt I could carry on.  I prayed all the way.

When I got to church, our friends noticed Sabine was not with me.  "Is everything okay?" they asked.  The grief started to well up again.  This was too much like when I first heard "you've got cancer!"

I had two choices here.  I could "suck it up" -- "the play's the thing!" -- and be a good Thespian.  Or, I could share this grief with my small congregation.  What would I want if I was sitting in the pew?  What would I expect from my pastor -- to tough it out, not to share his life when he had preached so much about being real and developing an authentic Christ-like community?

I don't enjoy sharing my grief in public.  I dislke public crying even more.  I still think of myself as a "tough guy."  But this was my community, these were my friends who had supported me and Sabine these past three years of cancer.  I decided I owed it to them to be authentic.  "Tough guy" wouldn't cut it.  I decided to share my grief and sadness.

After the gospel reading about a woman who was healed by Jesus, I stood up and read two verses of the psalm we just read (Psalm 71:17-18):

Since my youth, O God, you have taught me,
and to this day I declare your marvelous deeds.
Even when I am old and gray,
do not forsake me, O God,
till I declare your power to the next generation,
your might to all who are to come.

I was then planning on making an announcement concerning the lab test results  -- but I could not.  I became chocked up and could not speak.  So I sat down and asked my friend, Andy, who was assisting me with worship, to tell what I had shared with him and his wife earlier.

Andy made the announcement and then offered a prayer from the Book of Common Prayer, "A Prayer for a Loved One."  By that time I was able to collect myself and fill in more details and then we all prayed again for healing and strength for Sabine and each one of us.  I recited the 23 Psalm... "lo, though I walk in the valley of the shadow of death, you, God, are with me..."

The rest of the liturgy moved along until I moved to distribute communion to the congregation.  As they person held out open hands to receive the sacrament, I noticed red-rimmed, loving eyes shining up at me -- bouying me and Sabine up on the journey ahead.  I knew again why I was a Christian.

When I picked Sabine up she had just bought a new t-shirt and was wearing it and  smiling.  "I just needed some time" she said, "to think, pray, and pull myself together!"  Our prayers had worked! And Sabine was back to being her same positive, loving self.  On the t-shirt?  A cup with the inscription, "Half-Full!" (not half-empty!) I told her again how much I loved her and how we would, together, "press on!" 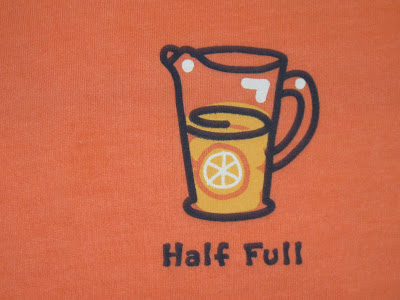