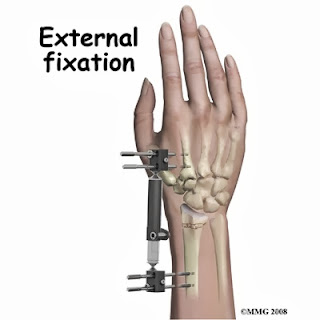 It's been a while since we have had a medical crisis -- and that's why there haven't been any posts on this site for quite some time. Up until yesterday evening both chemo and our life has been relatively easygoing.

After a wonderful mini-vacation including cycling, disc golf, stock car races, and a stay at a good old traditional Wisconsin lake resort, we returned only to have Sabine fall and shatter her wrist when a chair she was standing on collapsed while she was removing a window hanging.

The 9-1-1 call. The ambulance to our farm at about 7 p.m., seven hours in the E.R. and then an admission at 2 a.m. I went home to sleep for a couple of hours and then back to the hospital and the prospect of surgery.

Now up to this point, for most of us it's just a broken bone, and a cast for 6 weeks. But for a kidney dialysis and blood cancer patient, it's only just begun.

Here's what we may have to struggle with:

1. The broken wrist (both heads of the radius and ulna were snapped and one of the bones penetrated the skin compounded the fracture and presented an infection problem). Unfortunately, the injury was on Sabine's fistula arm (the access points for her hemodialysis) and that "buttonhole" site needs to be preserved (initially, it took three separate surgeries to establish the fistula).

2. If we cannot use her fistula, a tunnel catheter will have to be inserted into Sabine's chest (before the fistula was developed we dialyzed through one for over a year. It, too, could present an infection potential.

4. Sabine's blood cancer (multiple myeloma) makes her bones less strong and both repair and healing can be compromised.

5. She is currently in a cycle of chemotherapy which we hope will not have to be ceased during her orthopedic recovery.

6. The surgeon may not be able to cast the arm and will have to put pins and a connecting rod in her arm as an "exo" support (see picture). This also could lead to the possibility of an infection.

Sometimes things get complicated. But Sabine is a valiant and joyful fighter. And we do teamwork well together for these past 30+ years!

If you are a believer, pray.
If not, project healing thoughts for her.

Stay tuned. And for all of you who have already sent emails and FB messages, we both are deeply moved and thankful.

p.s. as I was writing this, her surgeon came down and informed me that the surgery went well -- they did have to put in the "exo" structure -- pins and rod system (but not traditional plaster cast.) Sabine will be in the hospital for another night and will most likely be discharged tomorrow (Tuesday).

NEWS FLASH: Now for the dialysis problem: can her arm be used for dialysis given the surgery? Yes! The orthopedic surgeon says he has no problem with it and that will preclude having to look for a new dialysis site (tunnel catheter!). The doc says Sabine can be discharged tomorrow. Tomorrow will have to be a dialysis day. Next hurdle is Sabine getting her chemo shot tomorrow and keeping that cycle going. Whew!