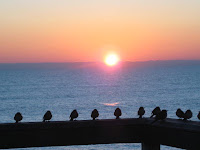 A view from the pier at St Augustine Beach -- look's warm doesn't it? You're wrong! It was about 25 degrees and we had frost on our windows! (Florida is like Wisconsin, just wait a bit and the weather will change). As we drove south along the ocean it quickly rose to the high 60s. Two days later it was in the 80s. We saw whales migrating north along the coastal waters between Daytona and St Augustine. 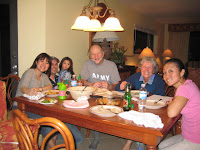 Dinner at Vistana on Hutchinson Beach -- joined by daughter Sumi, husband Scott and daughter Taylor (18 mos), and daughter, Yumi, who was enroute to her new Army assignment in upstate New York. Also present was Sabine's brother, Rainer and his wife, Rannae from the Vegas area. 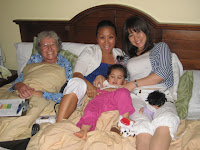 During our daily dialysis Sabine was often joined by the girls in bed. 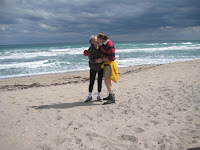 Grabbing an early Valentine's Day kiss on Hutchinson Beach where we did our morning walk/runs.


At Archie's Seabreeze Bar and Grill (where we attended morning worship on Sunday), Sabine found this guy who invited her to join a gang of buccaneers. Even though this guy was quite the "looker" he wasn't dialysis-qualified like I was. Sorry, Captain Hook! Another time! 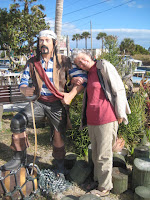